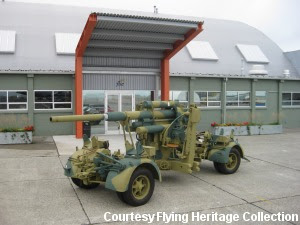 The Flying Heritage Collection, one of the world’s great collections of rare World War II-era fighter planes in flying condition, today announced the addition of two Flak 37 artillery weapons to the museum in Everett at Paine Field. The Flak 37 is a rugged, hard-hitting and adaptable 88 mm gun, which was the most famous artillery weapon of World War II. The Flying Heritage Collection will add one gun to the collection display permanently while the other gun, capable of firing blanks, will be displayed and fired at special public events only.

“The addition of the Flak 37s allows us to illustrate an important influence on the development of aircraft during World War II,” said Adrian Hunt, executive director of the Flying Heritage Collection. “Our hope for the museum is to continue to capture the extraordinary innovation in technology during WWII and provide a forum for the public to learn about and appreciate this rich history.”

Developed in the late 1920s, the Flak 37 was created by German designers working in Switzerland to avoid treaty restrictions. The “flak” gun got its name from the German word Flugabwehrkanone, meaning aircraft defense cannon. During World War II, 88 mm guns were often employed to attack high-flying Allied bombers since it could propel its high-explosive shell to altitudes beyond 30,000 feet at a rate of about 15 projectiles per minute. The versatile gun earned infamous status among Allied flyers, infantrymen and tank crews.

Both Flak 37 guns were built at an armaments factory in Pilsen, Czechoslovakia, for the German military. They were discovered in Spain and brought back to Germany by a collector after World War II. The guns were restored in 2008 by experts in Germany and the United States.

The public can see the rare Flak 37s for the first time and witness the first demonstration firing on Saturday September 19 at the final Fly Day event this summer. This will be the only opportunity this year to see the Flak 37 in action as it was during World War II.

Final Summer Fly Day – Luftwaffe Day (September 19)The Flying Heritage Collection will complete its tradition of flying planes throughout summer 2009 with its final event on Saturday, September 19 at 12:00 p.m. The free event, billed as Luftwaffe Day, will feature two German vintage aircraft in flight, a Messerschmitt Bf 109 and a Fieseler Fi 156 Storch, along with the German Flak 37s. The event offers a great opportunity for the public to see historic aircraft return to the sky and to witness the first firing demonstration of the Flak 37. More information is available at www.flyingheritage.com.